Music While You Work 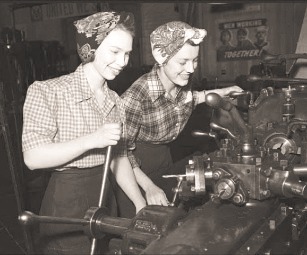 The programme began in World War II when the BBC was asked by the Government to provide a twice-daily programme of uninterrupted instrumental music aimed primarily at the factories, with a view to boosting morale and increasing production. The first programme was broadcast at 10.30am on Sunday 23rd June 1940 and took the form of a cinema organ recital, the afternoon edition went out at 3pm and between August 1942 and July 1945, a third edition was broadcast at 10:30pm for night-shift workers.

Initially the programme did not have a signature tune but in October 1940 after much searching the BBC chose the newly composed ‘Calling All Workers‘ by Eric Coates.

Although the programme became very popular with domestic audiences and later with motorists, it was aimed first and foremost at the factories, and strict rules were applied: predominantly familiar pieces, nothing lethargic, consistent volume, avoidance of over-loud drumming (which over a tannoy could sound like gunfire), and generally cheerful programmes to which workers could whistle or sing.

Until 1963 the programmes were broadcast live and consisted of light orchestras, dance bands, brass and military bands and small instrumental ensembles.

The final edition of ‘Music While You Work’- after 16781 editions –was broadcast on the 29th.September 1967 which was when the BBC Light Programme transformed into Radio 2.

For an in depth background of MWYW visit Masters of Melody. 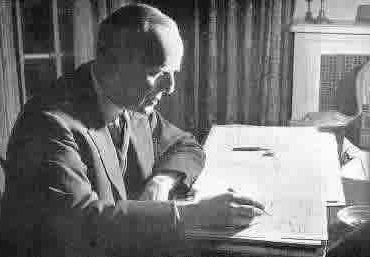 Possibly one of the most recognizable of all of Eric Coates marches. Coates himself has written about this piece and said that during 1940 he had struck a ‘blank patch’ which lasted for some months. It was his wife Phyllis who came to the rescue with the suggestion that he should write something especially for the Red Cross Depot where she worked. Coates told how the March was born – “I sat me down at my desk in the window, looking far away across London to the twin-towers of the Crystal Palace….and wrote what Phyl still calls her signature tune”

Interestingly, they had some difficulty in coming up with a suitable title, and after a number of abortive efforts to find one, a gangster film with G-men tapping out the usual ‘calling all cars’ supplied the solution, and ‘Calling all Workers’ it was. The march was dedicated to all workers and carries the inscription ‘To go to one’s work with a glad heart and to do that work with earnestness and goodwill’.

The piece was first broadcast in the autumn of 1940 by the BBC Theatre Orchestra conducted by Stanford Robinson from their wartime base in Cheltenham. Coates recalls that he and his wife ‘kept their fingers crossed’ that an air-raid would not curtail the broadcast.

The march proved very popular and was quickly recorded for a 78 by Columbia, with the Symphony Orchestra conducted by Eric Coates himself and was coupled on the other side with ‘By The Sleepy Lagoon’, which became the signature tune of another long running BBC programme, Desert Island Discs.